In this blog post I would like to talk to you about one of the destinations I was more excited about. In January 2018 I travelled to Miami, but I will talk about it later on. As I was going to spend to weeks in the US so we decided to fly over to New York and make the most of my time there. I had already gone through the customs control in Miami and I was already used to the timing in the US so I wouldn’t suffer from jetlag while in New York.

Before starting I must warn you that travelling for me doesn’t mean resting. My aim is to visit as much as I can given the time I have. Get ready to walk and walk. I will rest at home.

We travelled from Wednesday night to Monday morning, so we could have 4 days in total to visit the city. I know some of you will think that’s crazy, maybe it’s a short time to visit such a big city, but I have proved it. If you organize yourself, you can visit everything. At the beginning we were a bit scared of the weather in New York in January. I must admit it was cold, really cold. The skyscrapers make even a colder feeling and there’s also a super cold breeze that hits you in the face but that didn’t stop us from going. And we don’t regret it.

After spending a long time looking for hotels in New York, we finally decided booking Cambria Hotels & Suites New York in Times Square. We all look for the same, a cheap hotel in Times Square. Cambria Hotel & Suites is two streets away from Times Square. It’s not the cheapest one, but it was the one we liked to most concerning quality-price and we weren’t wrong. Well, I don’t want to keep talking, I will write you the itinerary below about those 4 days around the big apple.

Day 0/ Wednesday: Our flight took off from International Miami airport(MIA) to New York La Guardia airport (LGA). That’s the closest one toManhattan. We got an Uber once we arrived from the airport to the hotel. I was $35 to Manhattan. We arrived around 24.00h, so we went straight to sleep.

Day 1/ Thursday: We woke up early, at 8.00h and we were leaving thehotel at 8.30h to have breakfast. When we were done we started to walk from the downside of the 5th Avenue towards the Flatiron District, the ChryslerBuilding, Gran Central Terminal, we saw the MoMA building, the Empire State,etc. The 5th Avenue is sooo big, that we were walking up the entire morning. At the end of the 5th Avenue you can find the Central Park. It was so cold that we had a short walk through the park, took a few pictures, we got to the Met,Upper East Side and went back to the hotel.

We rest for an hour, had a nice shower and got ready because we had tickets to see The Aladdin Musical Show in Amsterdam Theater. I will talk about where to buy tickets to see musical shows in Broadway. After it finished we went back to the hotel and we had dinner.

Day 2/ Friday: We woke up early again. We wanted to take the ferry to see the Liberty Statue but we were told that it wasn’t worth it as the ferry passess too far away from the statue. So we decided to go have breakfast near the hotel and we went straight to Soho.

We walked around the streets in Little Italy and China Town. Once you leave the metro station in China Town you will start hear people whispering to you to sell you dupes for designer bags and watches. Apparently they have hidden stores and they change the local covers every day so the police never can prove the shop was actually there. When we finished having lunch we went back to the 5th Avenue because we had a ticket to go up to the Top of The Rock at 15.30h. It was $30 but definitely worth every penny. We walked up at that time because we also wanted to see the sunset from up there and hoy Manhattan lighted up. It’s a mandatory visit in New York.

Day 3/ Saturday: We woke up and we went to have breakfast in Brooklyn.The best pancakes I have ever tried. The bar is called Five Leaves (I will write another post about where to eat healthy and not that healthy in New York). After having breakfast we went to visit Dumbo and took some pictures from the New York skyline.

After that we crossed the Brooklyn Bridge towards Manhattan. Despite being Winter. Temperaturas have risen and we we are comfier. We kept walking to the Financial District and the World Trade Center. There we saw the Twin Towers Memorial. I actually had goosebumps.

We went back to the hotel to have shower and we left again to see the Lion King Musical in Broadway.

Day 4/ Sunday: We took that time with more calm. We went to Times Square and we stopped to see the ads without any rush. We went shopping inManhattan and saw the Madison Square Garden from the outside. We were lucky to be there that day as the Grammy Awards were taking place so we could see the attendants  arriving to the red carpet. Before having dinner we went back to Brooklyn to see the Manhattan Skyline all lighten up. No doubt it is a must in New York.

I hope you have all enjoyed it and that it helps you through your next trip to New York. Don’t forget to suscribe!

"A journey of a thousand miles must begin with a single step.” Spanish native translator & interpreter with passion for travel, fashion & lifestyle 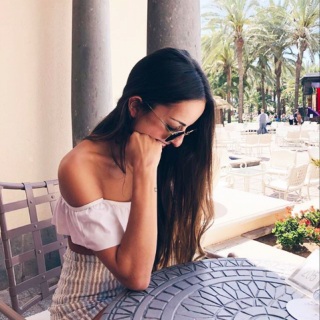 "A journey of a thousand miles must begin with a single step.” Spanish native translator and interpreter with passion for travel, fashion and lifestyle.

The coziest hat from @clementandgrace

A quick weekend trip to meet a new country and tic

I am back after a few weeks of madness! so excited

Last one with my fave breakfast in Bali💛 @balib

Happy Birthday to my one and only❤️

Can I go back in time?⏳Golden hour in Canggu💛

Soaking up the sun in the beautiful Portofino 🇮

Yes, that little person it’s me enjoying one of